I think taking criticism personally is an effect of insecurity. Often it is not a criticism at all but only a neutral statement, which we perceive as criticism or nagging through facial expressions and gestures or the pitch of our voice. I often find myself questioning what I have done wrong when I meet people in a bad mood.

Probably there are 1000 reasons why this person is in a bad mood, which is more likely than that I have something to do with it. In such a clear case, you will probably soon realize that you don't have to take the statements of this person personally. However, if it is not so clear, it already becomes more difficult.

In the stressful everyday working environment, companies often have to deal with harsher manners. Everyone is at the end of their rope, differences of opinion and conflicts arise more quickly, which can also become louder at times and in which criticism is passed on to others.

If you have a somewhat sensitive personality in such a case, it is challenging to keep one's composure and not take this criticism personally. If you fail in this, you will quickly feel hurt, humiliated, and offended, to which you can react in different ways.

3 Reactions to the feeling of "being-attacked-personally"

On the one hand, one can react with retreat, in which one leaves the room snapping and a little angry, avoiding the conflict and the person. This icy atmosphere in the department can also last for a few days because both sides feel that they are right and will not apologize.

If one has not already left, one begins to defend or justify oneself. Immediately the situation gets an emotional touch. You feel vulnerable and attackable, and a wall is built in front of you to protect yourself.

Another even more active reaction is the counterattack. If one feels personally attacked in a situation or conflict, the inhibition threshold to "hurt" the other person is relatively low. According to the motto, "Retaliate the same with the same." That can lead to insults and personal attacks, leading to long-term conflicts and are not so easily resolved. 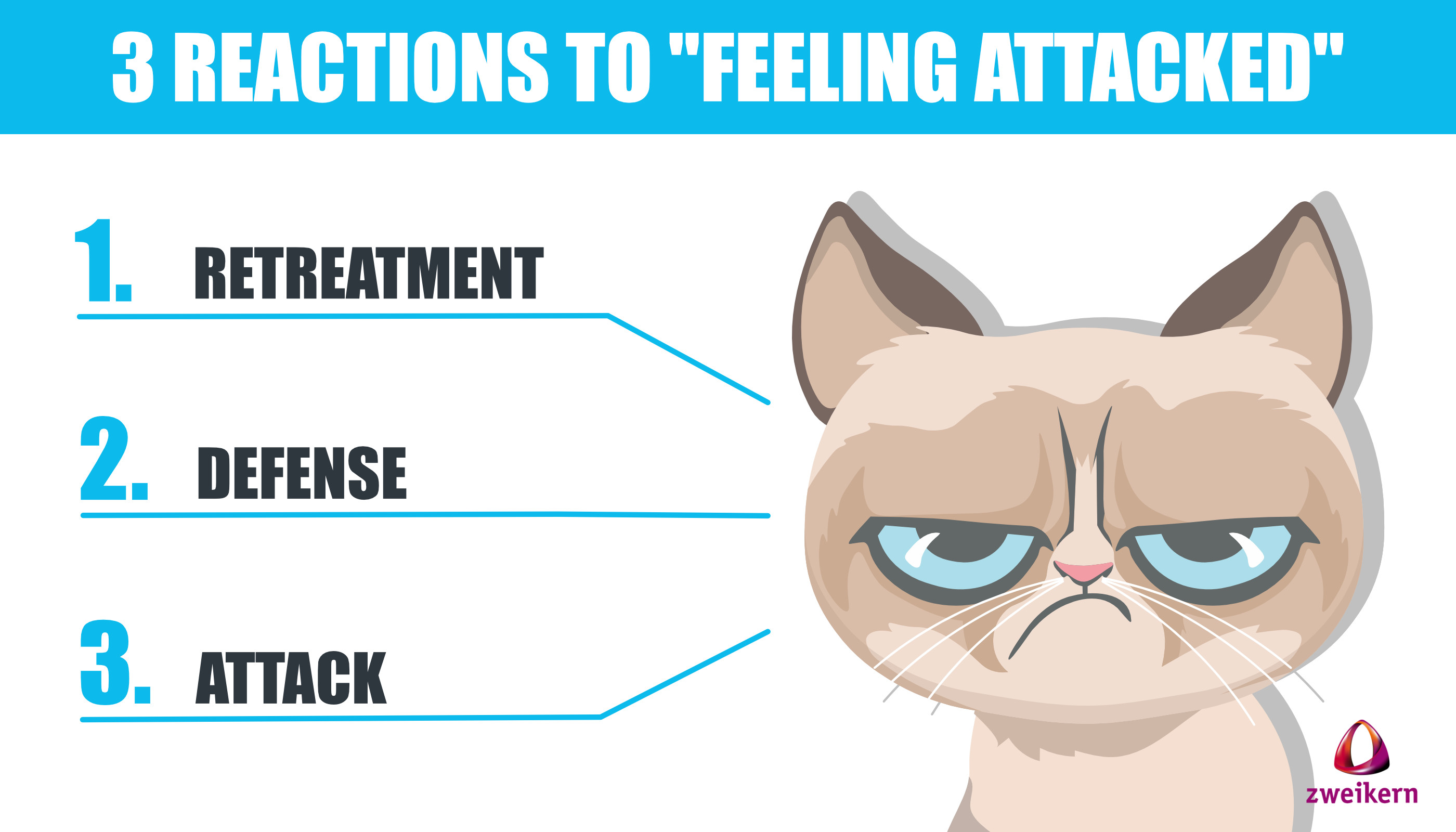 The "feeling guilty" for mistakes

Sometimes we feel guilty for something we are not responsible for. An example of this: Your boss comes into your office in the morning, upset and complaining about where the requested documents are, he needed them very urgently for the morning meeting, and so he had to improvise. Since you had to leave early the day before, you asked a colleague to finish the documents and put them on the superior's desk. She must have forgotten about it. Of course, you reply that you gave her the task, but you still feel responsible for the mistake. You think, "Oh, if only I had done it quickly myself" and apologize.

The "taking personally" of conflicts

On what does it depend on if we take criticism of ourselves in a conflict personally? In my opinion, three factors have the most influence on it. The personality, the experiences one has already gained in life, and also one's self-confidence.

In a study, it was found out that people who take conflicts personally also take them negatively. That manifests itself in avoidance behavior, in a strong motivation for revenge on the opponent, and leads to the fact that the persons are prevented from managing conflicts productively, are dissatisfied, and feel unwell. The outcome of conflicts is, therefore, dependent on how we perceive them.

The main problem lies in the fact that the insult prevents us from concentrating on the essential, namely, getting rid of the conflict or misunderstanding and going back to work with a clear head.

These negative feelings prevent us from being open to suggestions for improvement and from facing the situation. One is trapped in this role of "insulted liverwurst" and cannot get out of the situation. Often it is impossible to move on to conflict resolution.

Tips on how to avoid taking everything personally!

TAKE YOUR TIME AND A DEEP BREATH

This allows you to create some distance between you and the situation. Try to concentrate only on yourself to avoid getting into a "thought spiral" of self-doubt, which gets bigger and bigger. Try to control your emotions and question neutrally to whom the statement is directed, what is meant by it, and whether it might have anything to do with you at all.

REQUEST TO CLARIFY THE SITUATION

If you have managed to distance yourself and look at the situation neutrally, you can directly question your counterpart's statement. Just ask, maybe the statement was not meant in the way you received it. You can also tell us quite openly about how you feel about it. Often the other person is not aware of how the other person thinks about what was said.

MY WORLD IS NOT THE WORLD OF OTHERS

We all live in our world. We have different personalities, have been raised differently, and have had different experiences in life. Each person also carries his or her inner dissatisfaction differently to the outside. Some people overplay it, and some are introverted, others make an annoying impression or take their bad mood out on other people. It is not about you in such situations, only about the person who is spreading a lousy mood. If you take statements or annoyed looks of this person personally, you absorb this bad feeling, and you become also dissatisfied. 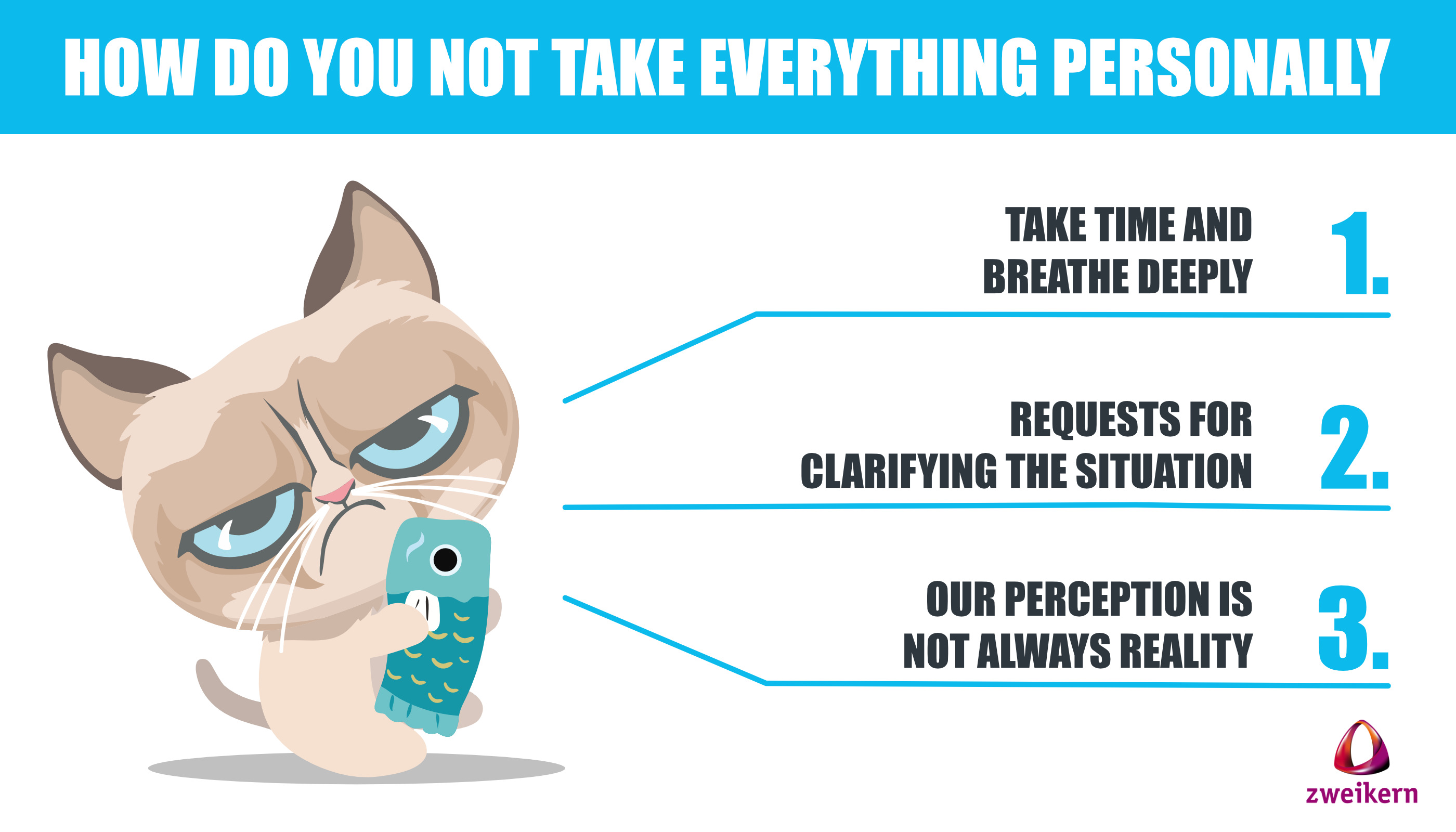 The next time you enter your supervisor's office and he greets you with an annoyed look and a defiant "Morning!" so that you would like to turn back right away, don't waste a single second wondering whether he is annoyed with you or whether you have done something wrong!

All this is, of course, to be distinguished from a constructive feedback discussion. Not every person who gives you negative feedback is dissatisfied and tries to get rid of his bad mood. Criticism and feedback are essential for us to develop further and become better. Do not see negative feedback as a personal attack, but only as a suggestion for improvement.

In the end, you alone have control over yourself. You determine which statements you allow to get to you, which of them can hurt you personally and which weighting you attribute to the opinion of others.

How do you feel about this topic? Do you quickly take statements or criticism too personal, or do they bounce off you like drops of water on your raincoat? We would be happy to discuss this with you, or if you share your experiences with us.